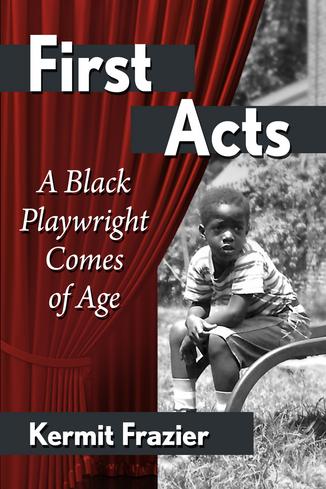 ​Playwright and television writer Kermit Frazier began life as a precocious Negro boy growing up in Southeast Washington, DC, during the 1950s and 1960s. As a student at an all-Black elementary school, Kermit was selected for a newly formed honors track at a predominantly white secondary school. Traveling a complex path, he tore down segregation barriers, balanced on an academic pedestal, and battled an internal war of denial against his same-sex attractions.

Here is an unconventionally structured memoir of a young Black man struggling with stereotypes, identity, and mild dyslexia while straddling two middle-class worlds, Black and white, and striving mightily not to be everybody's "other."

"Black boys who become writers have much to tell. Kermit Frazier's First Acts is America's story, a coming-of-age story. Frazier's world is one of shyness, loneliness, and depression. Such a world creates the puzzle he must navigate into manhood. The center piece of this memoir finds Frazier writing about dyslexia and his reading problems, as well as discovering his true sexual identity. This book is a portrait of a black boy as a young man. A journey through sports, parties, and Boy Scout camps. As the country moves away from segregation, Frazier finds himself moving into a better understanding of himself. He exhibits tough love when it comes to loving the man he has become. Filled with honesty and confession, Frazier's book should be of comfort to beautiful black boys waiting to be born." -- E. Ethelbert Miller, writer and literary activist, host of On The Margin (WPFW 89.3FM)

"Frazier's talents as a dramatist translate seamlessly to memoir writing in First Acts. From the opening pages we are drawn into a richly remembered life story as we watch the driven, intellectually gifted young Black boy who was Frazier then navigate the shaky territory of Washington, DC's newly desegregated schools. In rhythmic and evocative language, Frazier creates the highs and lows, achievements and embarrassments, the neighborhood (Anacostia) and people of his youth. And then he takes us beyond. Secrets are laid bare, and we see him wrestle with racism, identity, vocation, and his emerging sexual orientation. What a marvelous, revealing book this is about growing up Black and talented and gay in America of the mid-twentieth century." -- Evelyn Somers Rogers, associate editor, the Missouri Review​

"Frazier goes down memory lane without nostalgia but with a gentle recollection of the Anacostia of the 1950s, '60s, and '70s. He is preserving a history of Anacostia as proof against the inevitable changes of gentrification. . . . He's done a difficult job well--juxtaposing personal history with the larger narrative of a neighborhood within a city. He's drawn his mother and father, figures not often celebrated, lauded. Here are complex, loving portraits. Kermit Frazier's parents are thoughtful, steady, aspirational people I instantly recognize. This memoir adds a much-needed more to the stories of Washington, D.C., and Anacostia." -- Breena Clarke, author of Angels Make Their Hope Here, River Cross My Heart and Stand the Storm